The Iberian Lynx is the most endangered big cat in the world. Its population decimated by habitat fragmentation, centuries of human persecution and vanishing prey.

WWF’s objectives, in order to help conserve the last remaining Lynx, are to stabilise and increase the remaining breeding populations, and ensure that adequate areas of Mediterranean forest are protected in order to guarantee the long-term viability of the Iberian Lynx.

Since 2002 the territories of 8 female lynxes have been restored with the birth of over 50 kittens.

Camera traps have been used to record each individual and to better understand those that remain. Also radio collars enable lynxes to be followed as they move into new territories.This helps prevent poaching and also to identify which roads are too dangerous to cross.

WWF has been managing a captive breeding programme and releasing lynxes to formally occupied habitats. By mid 2015 45 captive-bred lynxes had been released. In particular the authorities are being encouraged to remain vigilant as poaching and road kills remain a threat. The new population in Extremadura is already growing with two of the released females having six cubs in early 2017.

In 2001 when Restore provided funding towards this project there were fewer than 100 lynx left. By 2017 there were over 300. 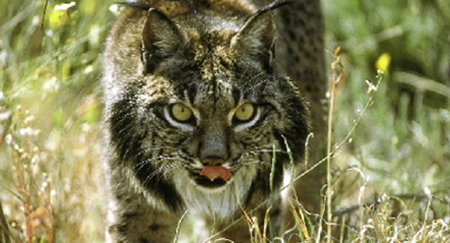 One of the female Iberian lynxes in the Captive Breeding Program in the Coto Doñana National Park, Spain
Photo: © WWF