Trees for Life is an award winning charity working to restore the native Caledonian Forest to its former range in the Highlands of Scotland. Since 1989, it has planted over 1.3 million trees and has facilitated the natural regeneration of ancient forest remnants in Glen Affric and at other sites to the west of Inverness and Loch Ness. The charity also advocates the reintroduction of the missing species of wildlife that formerly lived in the forest, as they are essential for the reestablishment of a balanced, self-sustaining ecosystem.

A key step in restoring the forest is to re-connect some of the woodland fragments that are isolated from each other in adjacent glens, to create a larger extent of contiguous forest. The Allt Na Muic watercourse in Glenmoriston offers one such opportunity, to re-establish a native woodland corridor, stretching from there northwards over the watershed divide to Glen Affric. Trees for Life’s Allt Na Muic Woodland Restoration Project has been supported by Restore Our Planet, and consists of several fenced exclosures for both natural regeneration of montane scrub on the higher ground and planting native trees lower down the watercourse.
Dwarf birch, a scarce montane species in Scotland, is recovering naturally inside one of the exclosures, and in the others alder, aspen, downy birch, eared willow, juniper, rowan and Scots pine have been planted by Trees for Life volunteers.

The restoration of the streamside forest will also benefit the freshwater pearl mussels (a UK priority species of conservation) that live in the River Moriston, which the Allt Na Muic flows into. 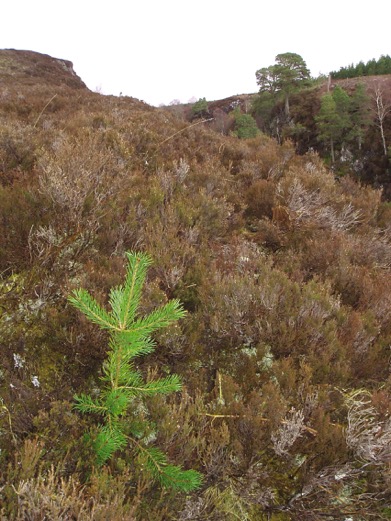